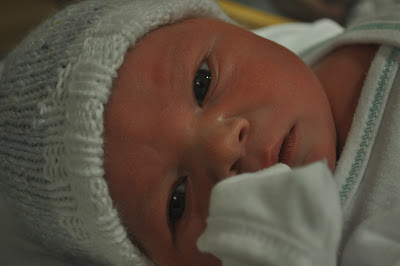 Here's an overview of Truman's first three weeks of life:

He received many visitors in the hospital. (Not pictured are Aunt Amy and Aunt Hilary) 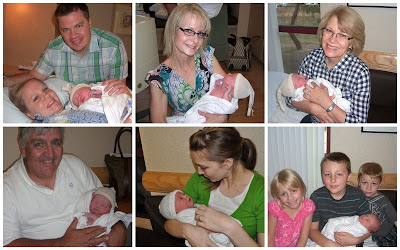 He had his first bath, which he obviously loved... 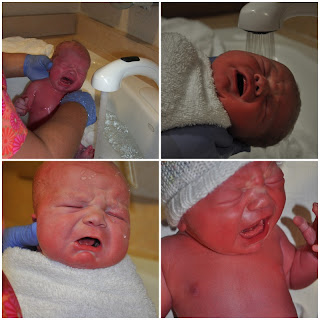 He spent only one night in the hospital--just enough to meet the 24-hour requirement--before heading home. 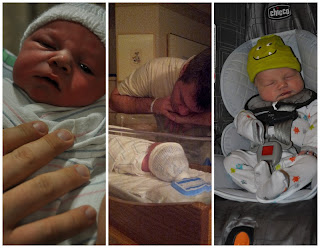 He's received LOTS of love from his big brother... 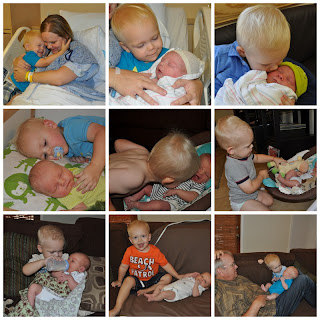 His hands drive him crazy.. 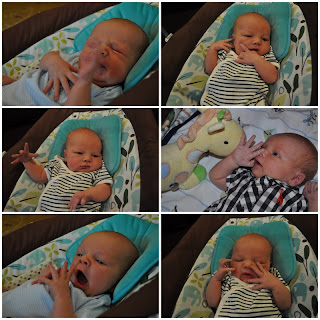 But he really doesn't need to be swaddled to sleep.  He prefers his side, stomach, or in someone's arms (but really, what baby doesn't?) 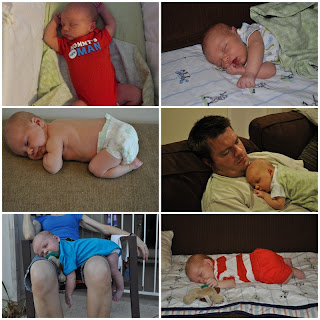 He's not as mellow as Dylan was.  He definitely has a voice and likes to use it...in fact, he spends most of his day screaming unless he's being bounced in someone's arms, so he looks like this most of the time:

We've started him on some reflux medicine that we're hoping will help him be a little more comfortable in this new world.  It's seemed to make a difference so far, so hopefully we'll have some better pictures of him to post soon.

Life with two is definitely different and is requiring some adjustments in our home, but now we can't imagine life without our Truman.
Posted by Jessica at 4:33 PM 2 comments:

Our poor little blog has been neglected...we have some good excuses (which I'll share below and hopefully have some follow-up posts on), but I hope we (which really means I because I'm pretty sure Shane has never posted--ever.) can be better at keeping up with this because I love looking back on it.

Without further ado, here's what we've been up to (a.k.a. why I haven't blogged in over three months): 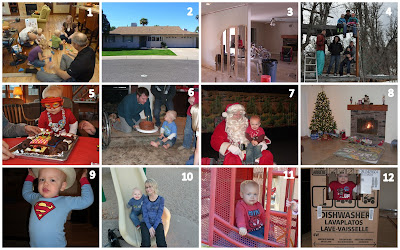 {Click for larger}
1. I got sent to Salt Lake for two work trips just two weeks apart. Dylan was still free to fly then and I don't work Mondays or Fridays so we got two long weekend with Grammie and Grampie!

2. We bought a new house! I realize we already had one house...and there will be a separate post about our new house, so I won't go into it here, but we LOVE our new house and are excited to transform it into exactly what we want.

3. During my long weekends in Salt Lake, Shane and his dad spent his weekends working on our new house...moving walls, pouring cement, painting...

4. We spent a whole week in Salt Lake for Thanksgiving, including a couple days at the family cabin.

5. Dylan turned 2!! We celebrated his birthday while we were in Salt Lake...

7. Dylan quickly figured out who Santa was (not so much the part about him giving presents, but that he was somehow connected to Christmas) and asked him for decorations when he met him at our ward Christmas party.

8. We celebrated Christmas in our new house, complete with a fire in the fireplace.

9. Dylan discovered superheros (namely, Spiderman, Superman and Batman) and refused to change out of his Superman jammies one day.

10. Grammie came to visit us for a week. She broke in our guest room and helped us organize and re-stock our new house, amid lots of playing time with Dylan.

11. We've had beautiful weather here lately, so we've spent a lot of time outdoors, especially at the park.

13. We discovered that Baby #2 will be joining our family around the 4th of July!

Hopefully most of these will turn into their own post over the next week or so, so stick with us. I hate playing catch-up, but I'd like to remember these things later.
Posted by Jessica at 12:19 PM 3 comments: 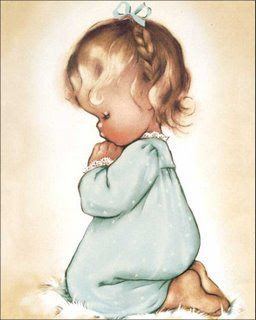 {Source}
Dylan has grown up around prayer. When he was really little, we encouraged him to fold his arms for prayers. As soon as he started talking, he would follow with a little "amen" of his own (which at church was quite loud and usually caused some chuckles around us). Then he discovered he could close his eyes...

Nowadays, when you say it's prayer time he clasps his little hands and closes his eyes. If you don't start right away he'll move his head like he's looking around for you, but he won't open his eyes. Seriously, it's the cutest thing ever. Maybe I'll have to get it on video.

Lately we've been encouraging him to say the dinner prayer. It started with him repeating simple things we told him to say, but he quickly picked up the general format and would sometimes say things before we prompted him to.

Last night, he took it to a new level... We asked him to say the prayer. He started it all by himself. Then Shane said, "Thank you..." and Dylan finished, "for this day." (Yeah, yeah, we should probably mix it up a bit since he already says this by default every time he prays). Then he went on...

[Meg is his babysitter (he had just arrived home from her house) and Henry and Richard are her boys (in junior/high school) that play with him when they get home from school. Obviously he LOVES them.]

We both melted. It was so sweet hearing it in his little voice.

Completely unrelated to prayers, but related to the cuteness of Dylan at dinner last night... I had cut my finger while making dinner, so I was wearing a band-aid at the table. Dylan knows band-aids mean "owies." He noticed on my finger, pointed to it, then said, "Mommy owie?"

Dylan is currently in LOVE with dinosaurs. I'm not sure how it started, but once he started talking about them a lot, I bought him a little set of dinosaurs to play with. He loves these guys. They all have names (some are their real dinosaur name, others are nickname) and he can tell you which one is missing if he doesn't have all of them in front of him. I generally carry two of these with me at all times because he likes to ask for them...

Last weekend Dylan went to play with cousin Jack, and they got to play with bubbles in the sink...something I never would've thought of to entertain Dylan. 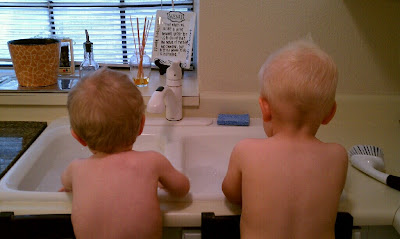 A few nights later, Dylan said "Dinosaurs bath." Feeling inspired by Ashlee, I grabbed my biggest bowl, made some nice soapy water, and let Dylan have fun with his dinos. (They probably needed a good washing anyway...) He loved it!

I'm hoping I can eventually channel this love of bubbles toward helping clean the house someday...

[P.S. Go here to see Ashlee's blog of Dylan and Jack at the splash pad... At least someone's blogging about my summer.]
Posted by Jessica at 3:49 PM 2 comments:

Yikes! Do you know how old Dylan is?? Well, if you don't, I'll let him remind you:

I can't believe how fast he's growing up. I try to be good and make note of the things he can do and what he likes as things change, but I'm feeling a bit behind. So hopefully this post will at least capture what life is like for "almost two" Dylan.

On days Dylan and I are home together, I try to mix in something fun, something productive (for me), and plenty of playing. Today we started with a game of baseball in the yard. Dylan loves his "red bat" and for some reason really wanted to play baseball (at 7:30 AM)... {Yes, I realize he's holding the bat upside down, but I pick my battles... Maybe someday I'll post a video of him banging it on the ground saying "Hey batter batter..." It's worth it.} 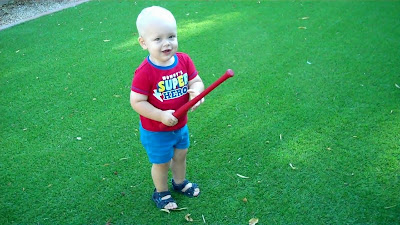 The we played animals and cars while I got ready. Dylan's animal box is the current favorite of all his toys. He usually packs them all onto his stool, but lately he's been "hiding" the animals in the trees... 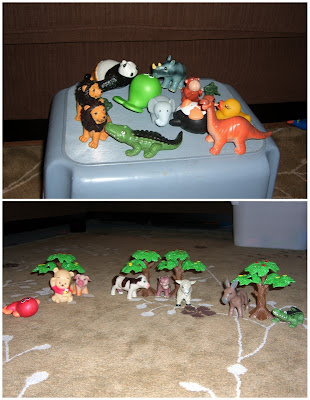 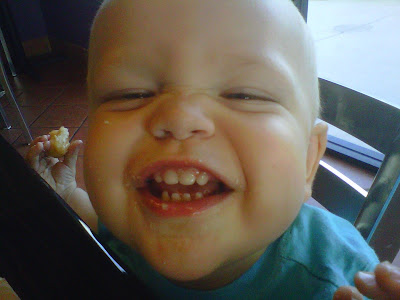 Then we headed to the grocery store. Dylan currently feels the need to select two toys to take with us wherever we go. Usually they stay in the car, but the cow and sheep accompanied us inside. Dylan requested blackberries, but I couldn't bring myself to pay $3+ for a six ounce pack...

Then we came home and Dylan helped me cook. He loves watching what we're doing on the kitchen counters. He stands on a chair and watches, asking questions along the way. Today he helped me put green onions in the food processor, and then learned that the food processor is not scary (especially when he gets to push the button).

Once dinner was prepped, we went out back for some water fun. Now that it's kind of cooling off here (i.e. not quite 100 degrees), I'm excited to get him back outside as much as possible. We played in the sprinklers and "painted" the sidewalk with water. 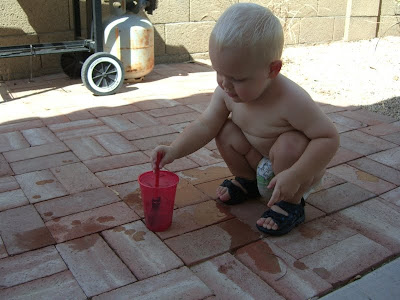 Then we headed inside for some lunch... Refried black beans, cheese, and some fruit. Dylan was nice enough to share with Triceratops :) 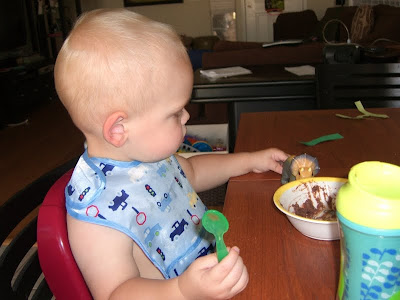 After lunch we looked at pictures and video of our family on the computer for a while. Then we got ready for nap time. This week we got How Do Dinosaurs Say Goodnight? and The Grumpy Dump Truck from the library. Dylan thinks the dump truck book is hilarious and he loves dinosaurs, so he won't go to bed until both are read...

And now, he's sleeping... Once he's up, we'll take a walk to the mailbox and then blow bubbles out front until Shane gets home.

Ever since we bought Dylan a talking T.Rex at the dollar spot in Target (talking = horrible screeching sound we didn't know it made until we bought it), Dylan regularly requests a trip there when asked what he wants to do. On Monday, we stopped there for a few things, and had the following conversation:

Dylan (pointing to a fruit smoothie pouch): I want eat it.

Me: We have to buy it first.

Dylan: Pay for it.

Me: Oh, you're going to pay for it? Do you have money?

Me: Where's your money?

Me: Where's your pig?


It was fun to watch his little mind put the pieces together. Hopefully he'll keep offering to pay for his toys and food...this could work out nicely for us.
Posted by Jessica at 9:49 PM 4 comments:

Dylan absolutely loves our iPad. In fact, he thinks it's his and asks to play it at least once a day. In all truth, it is great for him. He's learned animal names/sounds, shapes, colors, names of fruits, how to put together puzzles, and how to play memory match all through iPad apps. It's quite impressive really...
Last week Shane had to visit Dallas, New York, and Chicago in a 6-day period, so he took the iPad with him for entertainment on his flights. Dylan was okay with Shane being gone for six days, but he was not a fan of the iPad going on the same adventure. Here's what happened by day three:

(In reality, he doesn't act like this when he can't have the iPad. This was just a bad day for him. His nap was bad and it was almost time for dinner, so he was at his worst point of the day... In fact, he fell asleep in the car five minutes after this video was taken, but we thought it was too funny not to share.)
Posted by Jessica at 4:30 PM 2 comments: